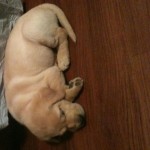 I am an avid dog lover as if you can't tell already. I have a Jack Russell (Tripp is his name) He is a neutered male, that we rescued he had been run over, abandoned and left to die. Then I also have two West Highland Terriers (A male Wes, and a female, Lily) and I just got a new male Yellow Lab Pup ( "Windy Lake's Jess Can't Get Enuff" "Jess" for short) and I got him back on Dec. 21st 2013. He was born on Nov. 16, 2013. And so this is my puppy and so I am bringing him up and training him for Hunter Retriever Trials and so he is with me 24/7. And yes I am very fortunate to have a job to where he can come to work with me everyday and sit right beside me at my desk. I was heavily involved in the Hunter Retriever Trials about 10 to 15 years ago and I have missed it so very much.... But as time would have it... And so as my kids came along and all of sports began to dominate my life totally and my labs grew old and passed on, they were just never replaced, because I just can't stand to see a dog that is meant to work and loves to do it every second of their life....I just could not see them confined to a life of boredom and never going out and hunting or trialing and so I ended up getting and raising strictly toy house dogs so my family could at least enjoy them... And believe me, I never had a house dog until them, but I can also assure you that Westies and Jack Russells are sure no sissy tootie type dogs.... Well then as all of my kids have grown up and all but one has graduated high school and one left in college....My wife Amy said... You know what Rick???? You need something to do besides drive all of us crazy, being in everyone's business and so I think you need to get yourself another Lab puppy... Andbless her heart, itsure didn't take me long before I had me one scoped and picked out and a deposit put down on him and when he was ready to go, which was early by my standards...I went to pick him up at a few days less than 6 weeks old....And for me that is very unusual because I normally pick them up at my magical number of 49 days old, as preached in the book "Water Dog by Richard A Wolters", who to me is the Supreme Master of Retriever Training. Anyway with this dog, my wife and both decided that he was not going to be living outside, except to pee and poop and hunt and the rest of the time, his place was going to be at my feet or at hers and that is where he has been ever since. I have spared no expense in taking care of him and in fact some people have accused me of him being my son Zach's replacement.... And in a way he is and he has been Zach's saving grace because it got me out of his hair and has kept me pushing him so hard in everything he does and it has refocused me on training this new pup and i know that Zach appreciates that as well. Zach is still the last son and he is still in high school and he has all the talent in the world in sports, as well as the grades to go along with it... So that is Just as an FYI to all of you. Anyway I came here to find out about food by happen chance and since I love to read and share information, this place has been a Godsend for Jess as well, because otherwise he would would be eating Pupina Puppy Chow still for his first two years, along with getting a scoop of milk replacer in every bowl of food with a spoon of bacon grease, instead of what is healthy and best for him. So for that I am thankful although it does kill me to to pay $57.98 for a 24 lb bag of dog food, not to mention all of the supplements that I am adding to his food as well. So there is a short biography of me and what is going on in my life and in the life of Jess my Wonderdog....