For those who still insist euthanized dogs and cats are not used to make meat meals for animal feeds, this silent undercover video shot near Los Angeles1 in April 2007 offers indisputable proof.

In a white paper published by LA County in 2004, the government assures its readers the meat meals are destined for use in fertilizer and animal feeds only.

Although this document clearly denies any intent to produce food for companion animals, it should concern every pet owner because these meat meals are so accessible to the poultry feed industry.

And that can make them easily procurable by less scrupulous and profit-driven pet food manufacturers.

After all, it’s naive to believe that every municipality in the U.S. has such a restrictive covenant in place.

Just the fact companion animals can end up in generic meat meals doesn’t guarantee the public of their universal exclusion from pet food.

There still appears to be a significant risk unidentified meat meals and animal fats prepared and sold by smaller rendering operations around the country could indeed end up in our pet food chain.

For proof, be sure to also watch the chilling video interview below with Hershel Pendell, president of the Association of American Feed Control Officials, the regulatory arm of the pet food industry.

Admittedly, the film is dated. But the message in it should dispel any doubt of this possibility.

In any case, this is why I always suggest consumers avoid products made with anonymous meat meals and animal fats — and stick with species-identified ingredients. 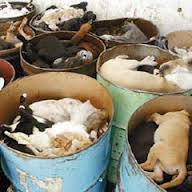