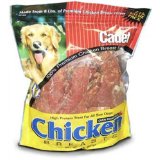 The Company is taking this action after learning this week the New York State Department of Agriculture and Markets found traces of antibiotic residue in samples of Cadet brand Chicken Jerky Treat products.

These antibiotics are approved for use in poultry in China and other major countries, but are not among those approved in the U.S.

According to the company, Cadet Brand Chicken Jerky Treats are safe to feed as directed and have not been linked to any illnesses in dogs or humans.

However, the company claims that…

“…due to regulatory inconsistencies among countries, the presence of antibiotic residue is technically considered an adulteration in the United States.”

Because of this request, the company has decided to conduct a voluntary withdrawal of these chicken treat products nationwide.

According to a statement by IMS Trading Corp…

“A double testing program is being established to check for these antibiotics in China (point of origin) and the United States before we consider to sell these products in the future.

“Testing will be based on a scientifically sound statistical sampling program.”

The announcement goes on to read…

“There is no indication that the trace amounts of antibiotic residue are linked to the FDA’s ongoing investigation of chicken jerky products.

“The trace amounts of antibiotic residue (in the parts-per-billion range) do not pose a health or pet safety risk.”

Get Critical Dog Food Recall Alerts
Delivered to You by Email