In Part 1, we talked about how contaminants found in some lower quality foods could possibly be the cause of chronic allergies in dogs.

We also talked about how these unwelcome infestations can be especially abundant in cheap, low quality feed grains.

Yet grain mites and insects can together create a much bigger problem.

They can easily pick up and spread the spores of highly dangerous molds.

I used the word “dangerous” here because these molds are capable of producing some of the world’s deadliest natural toxins.

Like their cousins — mushrooms and yeasts — molds are members of a family of organisms known as fungi.

Yet unlike mushrooms, molds are completely invisible to the naked eye. What’s worse, they reproduce by creating even smaller seed-like particles called spores.

Now, because molds and spores are so microscopically tiny, they can easily spread by way of the wind — or by hitching a ride on the bodies of mites and weevils.

So, it doesn’t take long for an entire storage bin of cereal grain to become quickly contaminated.

And because they’re so cheap, contaminated grains are more likely to be found in lower quality dog food.

Grain Molds and Their Deadly Venoms

Of course, like humans, dogs can be allergic to the molds and spores that ultimately find their way into their daily rations.1

Yet the greatest danger to any pet lies in the potential for ingesting the poisons produced by the molds themselves.

These exceptionally dangerous poisons are known as mycotoxins.

Today, there are hundreds of known mycotoxins. Here are a few of the more common ones that can affect many animals, including dogs…2

Mycotoxin Poisoning Can Produce
a Tragic and Painful Death

If a dog were to eat a commercial pet food contaminated with a disease causing level of aflatoxin, the result could be deadly.3

Symptoms of acute aflatoxin poisoning include… 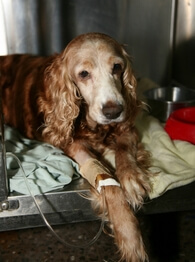 A rare disease?  Not quite.

These are the very same symptoms that affected and killed so many innocent dogs in 2005 and prompted an emergency recall.

That was the year Diamond Pet Foods of Gaston, South Carolina made and distributed a large batch of aflatoxin-contaminated dog food.4

An isolated event? Not hardly.

Diamond Pet Foods shipped the tainted products throughout the United States and to 29 other countries around the world5.

A tragic and deadly incident, for sure.

Yet another greater danger awaits the trusting consumer.

No Antidote — No Cure

An unexpected hazard of aflatoxin results when a dog ingests only a small amount of the poison — a dose not large enough to cause the more obvious symptoms of acute toxicity.

Once aflatoxin enters a dog’s body, it can cause serious damage to the cells of the liver. There’s no antidote and no known cure.6

What’s more, long term exposure to even small trace amounts of aflatoxin can ultimately lead to a deadly form of liver cancer.7

In our opinion, the maximum amount of aflatoxin that should ever be allowed in any commercial dog food should probably be as close to zero as possible.

Although cooking can kill the mites and molds, it has no effect on the poison itself. So, the mycotoxins maintain their dangerous potency even after they get “baked” into the finished dog food.

And if that’s not enough, your own open package of pet food is capable of developing an ugly infestation, all by itself.

That’s because dog food can easily become contaminated with insects, mites and mold — right inside your own home.  All it takes is for one stray insect to deposit a single mold spore into an open bag of kibble.

And suddenly, your dog’s at risk.

How to Protect Your Dog

Here are five simple suggestions to help you protect your dog…

Spread the Word — Save a Life

Please remember, dog food grain ingredients might just be one of the most frequently overlooked causes for serious disease in otherwise healthy dogs.

So, go ahead. Spread the word about grains in dog food. And be sure to tell everyone you know who has a dog they care about.

If you missed it, click here to read Part 1 of this article now.