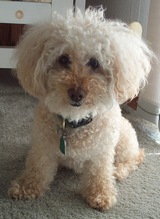 In 1995 my wife and I adopted a precious little shelter dog named Penny. Her short but troubled life had been a featured story on a local morning television show.

Penny was a small poodle-terrier mix. Her deep brown eyes concealed the more than two years of daily abuse she had suffered under the care of her previous owner.

Penny quickly filled our home with joy and our hearts with love.

A Special Diet Gets Rejected

But sadly, not long after her adoption, Penny developed a digestive health issue. So, at the recommendation of her doctor, she was placed on a “special” diet — a prescription dog food supplied by her veterinarian.

Little did we know her dog food might eventually contribute to her downfall.

From the very beginning Penny rejected the food.

When we reported the problem to the vet, he suggested we ignore her “attitude”. He assured us she would eventually grow hungry enough to overcome her distaste for the dog food.

And we tried. But we just couldn’t do it.

We just didn’t have the heart to starve our sweet little girl. And yet we innocently trusted this doctor-recommended dog food. After all, the can even looked like medicine — complete with its “scientific” name.

A Sneaky Idea That Works — for a While

So we found a way to disguise the dog food by grinding up our own table meat with the prescription dog food.

And that seemed to do the trick.

For years we continued to feed Penny some form (or another) of that same brew of prescription dog food mixed with our own table food. Chicken, beef or pork

Penny never really welcomed her mealtime concoction. She simply tolerated it. Sometimes she would spend as much as fifteen minutes picking through the mixture trying to avoid the manufactured portion.

Well-Meaning Advice
May Have Been Deadly

Then, in 2007, things changed. Following an injury, Penny gradually stopped eating altogether. No matter what we mixed with her food, she simply refused to eat.

So, our new vet suggested we try feeding her canned cat food. She felt the higher meat content would be more appealing to Penny.

And she was right. It worked. Penny began to eat again.

However, when she developed signs of severe weakness and visible weight loss we began to suspect her diet. So, we immediately returned to the old combination.

But it was too late.

Penny’s condition became visibly worse. Her chronic ear infections (which she had suffered from most of her life) intensified wildly.

She lost even more weight.

Then, on December 1, Penny reached the point where she could no longer move. She was euthanized at 9:30 that morning.

The Biggest Mistake You Could Ever Make
When Choosing Dog Food

As I write this it’s still difficult to choke back the tears.

Because of what happened to Penny, I became painfully aware of something I had ignored over a lifetime of caring for all my family dogs.

I had taken for granted the nutritional design and safety of commercial dog food.

You see, 2007 was also the year of the U. S. government’s now infamous pet food recall. And we were shocked when weeks later, we found Penny’s brand of cat food was on the FDA’s list.

Unfortunately, we had already discarded the surviving cans. And it was too late to compare the published lot numbers against that official list.

Was this what took Penny’s life? Or was it what we later discovered to be the nutritional inferiority of her predominantly corn-based diet?

In all those years of caring for Penny it never once occurred to us that we might be feeding her anything that could jeopardize her life.

In fact, quite the opposite.

We had always thought that because we were paying extra for a premium food — and adding quality meat — we were surely giving her the very best.

Yet it appears we may have been diluting the mineral content of her food and robbing Penny of complete nutrition.

In any case, the melamine laden dog food was almost certainly the main cause of her death.

I know your dog must certainly be a cherished member of your family, too. And I know you would never knowingly do anything to endanger your beloved pet.

But what you don’t know could do just that.

That’s why I created The Dog Food Advisor — to share with you what I’ve learned. And to show you how to keep Penny’s tragic story from happening to your dog, too.

So, give your precious pet the best opportunity for living a long and healthy life. Provide her with a safer and more nutritious dog food. To do that you must:

With a little effort, you can significantly improve the chances of feeding your dog a healthy and more biologically appropriate diet.