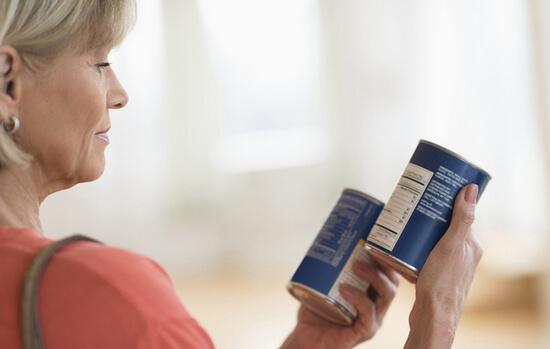 Without a measuring method known as dry matter basis, it can be impossible to accurately compare dog foods.

That’s because pet food companies report the nutrient content of their products using something known as Guaranteed Analysis.

And on an “As Fed” basis… which means, as the food is dispensed from its container.

In essence, Guaranteed Analysis is the pet food industry’s version of the Nutrition Facts “panel” printed on every package of human food sold in the U.S. and Canada.

However, when used alone, these numbers can be misleading.

That’s because the system used for reporting the percentages fails to consider the varying amount of water present in different types of foods. And this can be a critical factor when comparing wet dog foods with dry kibbles.

“To make meaningful comparisons of nutrient levels between a canned and dry product, they should be expressed on the same moisture basis.”

So, when comparing the nutrient content of different products, it’s important to first remove 100 percent of the moisture content from every dog food being evaluated.

This moisture-free approach to stating the true nutrient content of any food is known as dry matter basis.

Let’s say you have a can of dog food listing a Guaranteed Analysis protein figure of 10%. This is the protein content just as it’s fed from the can — what the industry refers to as “as fed basis”.

However, what if that same label revealed the product contained 75% moisture? And what if you were to completely remove all that water from the can?

By the way, this same method for computing dry matter basis works for any other nutrient, too.

However, when you’re comparing canned food to dry kibble, the issue becomes critical.

For example, say you’d like to compare two products — a can of dog food with a bag of kibble.

The canned “wet” product lists protein content at 10% and the dry kibble reports protein at 23%.

At first glance, the kibble looks like it contains more protein. Right?

Using Guaranteed Analysis, the wet food shows a water content of 75% and the kibble, just 10%.

Now, let’s remove all the water from both dog foods. Take a look at the protein values after converting the data to dry matter basis…

The canned product now lists 40% protein, compared to kibble’s 26% figure? The wet food contains much more protein — on a dry matter basis — than does the kibble.

On the surface, when reading a package label, canned dog foods almost always look inferior to their kibble counterparts.

However, looks can be deceiving.

So, don’t be fooled by a dog food label’s protein or fat numbers. When comparing the nutrient content of two or more dog foods, be sure to first convert the labels’ figures to dry matter basis.