These common pet food ingredients are loathed by many. Yet they’re accepted — and even revered by others.

Fans claim animal by-products are nutritionally no different than any other type of meat. And they blame the ingredients’ noted unpopularity on the unsavory mental image they invoke.

Something supporters like to refer to as “the yuck factor”.1

Critics, on the other hand, insist these ingredients are nothing more than inedible waste of inferior nutritional value.

What Are Animal By-Products?

Animal by-products are what’s left of a slaughtered animal after the parts intended for human consumption have been removed.

This meat processing scrap (known as offal) is considered inedible by many cultures and includes waste material like:

But there are exceptions.

Giblets (livers, hearts, gizzards and necks) as well as other organs can still be sold as edible meats as they are — or used to make hot dogs, bologna and sausage.

However, what makes some by-products edible (and others not) isn’t just a matter of what they are but how they’re handled after slaughter.

For example, giblets not refrigerated immediately after slaughter but stored for up to 24 hours in a hot offal2 trailer cannot be sold for human consumption.

Yet they can still be legally used for making pet food.

Likewise, dead-on-arrival animals or other condemned parts3 that have been declared inedible and unfit for human consumption can still be used for making pet food. 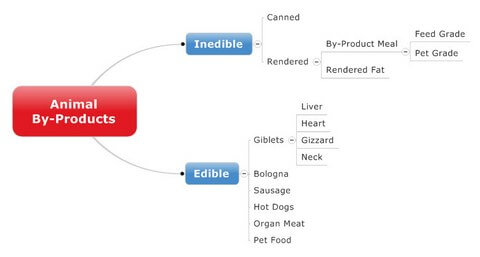 As you can see from the diagram, there are two primary uses for meat by-products…

Inedible by-products not processed into canned pet food can be rendered.

Rendering is a process similar to making stew. Except that the stew is intentionally over-cooked.

With rendering, the idea is to start with a stew of by-products and cook away the water.

Then, skim away the fat and bake the residue.

What you end up with is a concentrated protein powder commonly known as by-product meal.

In the specific cases of chicken or poultry by-product meals, there are two recognized grades…

The result? Pet food grade by-product meal was found to be…

Based upon the source of their raw materials, there are two ways to identify by-product meals.

Named by-product meals have one thing in common. They all clearly identify the source species of the by-products that was used to make the meal.

These common pet food ingredients can include…

And the One Type You Must Never Trust

On the other hand, generic by-product meals do not identify the source of the meat. Instead, they use vague and non-specific names like…

Because you can never know the source of the meat used to make generic by-product meals, purchase of pet food products containing them should be avoided.

When comparing animal by-product meals with their “regular” meal counterparts, the differences can be nutritionally insignificant.

For example, in the case of rendered ingredients, the digestibility, biological value and amino acid content of both poultry and poultry by-product meals are nearly identical.8

So, if there’s little nutritional difference between the two, why then do some companies use meat by-products… while others don’t?

There’s one glaring and indisputable reason animal by-products remain so popular with some manufacturers… and not others.

Animal by-products are simply cheaper… notably cheaper than most any other comparable meat product. They’re used for making dog food because they save money. Not because they’re more nutritious.

Why is this important to a pet food shopper?

Although finding animal by-products in a recipe doesn’t guarantee you’ve discovered a good or a bad dog food, their presence must always be considered a reliable clue the food is made with cheaper ingredients.

First, watch what you spend. Never pay top dollar for any dog food that lists animal by-products on its label.