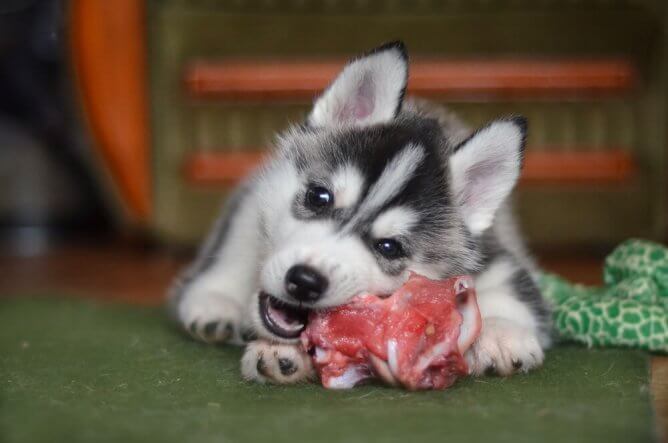 Are dogs carnivores… or omnivores? The Great Debate goes on. And on.

When it comes to choosing dog food, it’s important to know the answer to that question.

So, if you’ve already been told dogs are indifferent omnivores with no natural preferences…

All scientific evidence clearly points to the fact that…

Dogs Have a Natural
Carnivorous Bias

From DNA studies, we know dogs evolved directly from the timber wolf somewhere around 15,000 years ago1.

And, of course, it should come as no surprise. Wolves are clearly carnivores.

So, by their very genetic pedigree, dogs also demonstrate similar and noticeable carnivorous traits. Their teeth, their digestive systems and their behavior clearly confirm this fact.

Yet dogs must also be recognized for their significant omnivorous ability. Their proven ability to digest carbohydrate-based foods has been known for many years.

After all, modern genetic research has proof that ten canine genes play key roles in starch digestion and fat metabolism.2

However, a dog still shows unmistakable evidence that its body is optimized for eating meat.

For comparison, think about a typical herbivore… a dairy cow. Picture the way they “chew their cud”.

Cows chew widely from side-to-side. And they have broad, flat back teeth. And flat teeth are ideal for grinding grains and plant material into finer particles.

True omnivores (like humans) share this same combination of boxy back teeth and sideways grinding motion common to herbivores. Think of your own mouth and how you chew.

Dogs, on the other hand, don’t have flat teeth. Like all carnivores, they have narrow pointy back teeth.

Plus dogs can’t chew from side-to-side. Their jaws can only move in an up-and-down, chop-chop motion. It’s the perfect combination for cutting meat into smaller chunks.

Carnivores do not produce amylase in their salivary glands.3

Amylase is a specialized enzyme most herbivores and omnivores produce in their saliva. It helps begin the break down of starchy carbohydrates into simple sugars… before they enter the stomach.

Although dogs do produce amylase, the enzyme is added further down the digestive tract… in the pancreas and small intestine.

Since they consume fewer but larger meals, carnivores have bigger stomachs than their grazing, plant-eating counterparts.

And the stronger acid kills the disease-causing bacteria abundant in decaying meat.

What Do Dogs Eat?

In his revealing, 4-part series, Dr. Conor Brady explains why dogs should be fed as carnivores. Although the video is technologically dated, its content is noteworthy and fully referenced.

Welcome to the Age of Choice

In spite of their natural carnivorous design, dogs have still managed to evolve over thousands of years… surviving on the meat and non-meat scraps and leftovers of human existence.

So, over time, dogs have proven to be fully capable of thriving on a variety of foods.

Today, the dog food marketplace has become a living, breathing witness to the animal’s adaptive ability… and is abounding with an astonishing array of product designs.

Some favor meat. Some feature vegetables. And others are made almost entirely of cereal grains and beans.

So, how do you choose the right one for your pet?

Knowing that dogs are optimized for eating meat can make it easier to recognize better dog foods.

Even though dogs do demonstrate a notable omnivorous capacity, we believe it’s important to give preference to meat-based products. That’s because…

Whether you believe they’re carnivores or omnivores, dog’s possess an undeniable carnivorous bias