December 6, 2012 – The Food and Drug Administration is warning pet owners and caretakers not to feed their animals certain lots of Nature’s Deli Chicken Jerky Dog Treats because they may be contaminated with Salmonella bacteria. 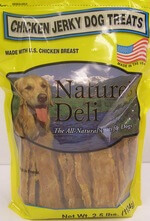 The affected products include packages with a lot code of BESTBY061913DEN.

Today’s FDA warning is an expansion of the recall posted by The Dog Food Advisor in early October.

The treats are made and distributed in the U. S. by Kasel Associates Industries Inc. and were sold at Costco stores in the Denver, Colorado area.

Although Kasel has declined to perform a voluntary recall at this time, Costco is working with FDA and has removed all of the affected products from its shelves.

The company will also contact customers who may have purchased the product to provide additional instructions.

The product is sold in 3 pound packages labeled as Nature’s Deli Chicken Jerky Dog Treats. The package also includes a digital photo of a dog on the front panel and transparent sections to view the product within.

The lot code can be found on the reverse side of the package in the transparent section following the phrase “All American Dog.”

Why the Product Is Being Recalled

In September 2012, a retail sample of a Kasel dog treat product was tested by the Colorado Department of Agriculture and found to be positive for Salmonella.

An FDA follow-up inspection at the firm found certain finished dog treat products and 34 out of 72 environmental samples positive for Salmonella.

On October 2, 2012, the company recalled one lot of its Nature’s Deli Chicken Jerky Dog Treats. However that recall did not extend to the lot code covered by this warning.

In November 2012, a retail sample of Nature’s Deli Chicken Jerky Dog Treats taken by the Colorado Department of Agriculture tested positive for Salmonella.

These treats are manufactured in the United States and are not associated with FDA’s investigation in reports of illnesses in dogs associated with consumption of chicken jerky treats.

FDA has not received any reports of illnesses associated with these treats.

According to the FDA…

Pets with Salmonella infections may become lethargic and have diarrhea or bloody diarrhea, fever and vomiting. Some pets may experience only a decreased appetite, fever and abdominal pain.

Infected, but otherwise healthy pets can be carriers and infect other animals or humans. If your pet has consumed any of the affected product or is experiencing any of these symptoms, contact your veterinarian immediately.

As with humans, dogs who are elderly, very young or have impaired immune systems are more vulnerable to Salmonella infection.

Consumers should dispose of these products in ways that people and animals, including wild animals, cannot access them, such as placing them in a securely lidded garbage can.

Get Dog Food Recall Alerts
Delivered to You by Email